A few months ago, I set out to create a more subjective way of ranking 2014's music festivals.  After a long night of putting together calculations, I came up with the 2014 Music Festival Calculator.  It matches the festivals up against each other using a band scoring method that ranks Best Value, Best Quality and Best Depth Festival.  It provides users a way of scoring each band at each of the major festivals and spits out rankings on which festival fits their needs.  Well, I'll be attending a few festivals this summer and decided it was about time to use my tool.
I ranked 8 major American music festivals this spring and summer by going through each lineup and giving bands and artists a score from 1 to 5.  Scoring bands at a 5 if they were in my top 5-10 must-sees and scoring bands a 1 if I have just never heard of them or think they suck.  It will be blatantly clear that I'm a huge fan of Jack White and The Black Keys and I'm not a huge fan of Skrillex or Outkast.  Those scores along with some other variables then drove quality, depth and value of each lineup and stacked them up against each other.  Here is a brief explanation of the scoring system.
Quality of Lineup
The average score of the bands in the lineup.  As I mentioned I scored each band 1 to 5.
Depth of Lineup
The total score of the bands in the lineup.  This is where festivals like Coachella and Bonnaroo excel because of just sheer size of the festivals.
Value of Lineup
The depth of the lineup divided by cost of the festival.  The score shows cost per depth (not cost per band, that would be too generic).  A band that has a ton of depth and is average priced, would score high here.  This shows you best bang for your buck and where you're getting ripped off.  Let's face it some festivals are way overpriced...cough, cough Sasquatch!
I also just limited the rankings to the festivals below.  I know I'll probably get heat for this because there will be some yokel in West Palm Beach saying that SunFest should have made the list.  Sorry you turd, this ranking is only for the big boys.  The only big festivals I've left off this list is Outside Lands in San Francisco (because I started putting this together before they released the lineup yesterday) and Austin City Limits Festival because the lineup isn't out yet. 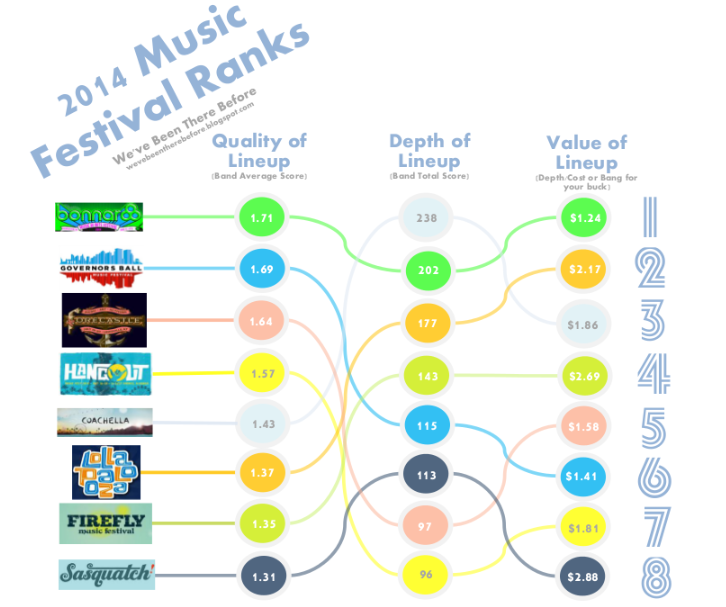 Bonnaroo
It's not surprising that Bonnaroo tops all of the festivals in two of the three categories.  With pulling in the likes of Elton John, Jack White, Lionel Ritchie, Kanye West, Avett Brothers, Vampire Weekend and Phoenix its no wonder how it got my vote for highest quality and highest value.  At $284 a ticket, its extremely reasonable even though the festival in the middle of nowhere.  The lineup is stacked from top to bottom too, with bands like Dr. Dog and Lake Street Dive performing during the day, its going to be jammed packed.  I'll be at Bonnaroo this year for the first time and looking forward to the full festival experience.  I just fear for nasty schedule conflicts....
Governors Ball
With an insane grab of The Strokes and similar heavy hitters as Bonnaroo like Jack White, Vampire Weekend and Phoenix, Governors Ball has emerged as a must-attend summer festival.  Although coming in second in quality, Governors Ball fails to bring the depth and thus value.  Not having as many bands isn't always that bad either especially if one of the bands is The Strokes.
Forecastle
There is never a lot of mention of Forecastle in lineup reviews.  With Jack White and Beck headlining Saturday and Sunday night, Forecastle stepped up to mess with the big boys.  Its a shame they had to go and get Outkast like everyone else.  A band like Vampire Weekend or more of a folk act like Avett Brothers (even though they headlined last year) to fit more into the landscape of the festival would have been nice.  Nonetheless, Forecastle has made it and comes in at number 3 in quality.  If they grow a little bit over the next few years they'll be right there with the Bonnaroo's and Lollapalooza's (on a good year) for depth and value.  The venue in Louisville is just so awesome and such a great area.  I'll be going to this one too.
Hangout Music Fest
This is only American festival so far this year to nab The Black Keys, which in my book gets them extra brownie points.  The venue also looks insane being right on the beach in Alabama Shores.  Jack Johnson and Modest Mouse add to the quality and hopefully this turns into a solid festival for years to come because it would be a nice destination festival.  Just not enough depth for it to belong with the heavy hitters this year.
Coachella
I knew Coachella would come strong in the depth category just because of the volume of bands that perform.  However, I'm just not into the lineup this year and for that matter the last few years.  It does seem like they aim for the uber-hipster audience.  Bands so cool, you've never heard of them.  Except, how does Outkast fit that mold?  Whores.  Coachella has always been a festival to be at though, not necessarily a festival that you have to be at for the lineup.  Although insanely priced, its still a bit of a value because of the depth.
Lollapalooza
Boooo.  I hate you Lolla.  You scarred me this year.  Why would you crap on my yearly tradition with my buddies?  Eminem, Outkast and Skrillex?  I gave a detailed review of the lineup a few weeks ago and don't really want to get pissed off again, so I'll stop.  Lolla still comes through as being top 3 in value still.  One more year like this year though, it will be worthless.
Firefly
I really wanted to check out Firefly last year and the year before, but couldn't make it out.  This year, I'll just pass.  Pretty low quality as not many big names appear outside of Foo Fighters and Jack Johnson.  High depth and value due to volume of bands again.  They need to make people want to travel to Delaware in order to have this festival.  That just doesn't happen with this lineup.
Sasquatch!
Last in each category besides depth which it was third last.  I hate to say this, but Sasquatch! deserved this.  Money hungry by trying to have two weekends with two lineups, but still jacking up the price, they had to cancel the second weekend of 4th of July.  I've read they canceled the wrong weekend, because the second weekend was more eclectic.  Eclectic doesn't sell tickets.  I'm so happy I didn't buy tickets and book a flight (like I almost did) to Seattle before the lineup came out to attend this.  This is one festival where I can say Outkast belongs.  Two whores living in sin, taking hard-earned money from festival goers.  Eff yourselves.

Below is a small sample set of band scores.  I haven't released my full scores as of yet, but will post them shortly.  You'll notice quick I'm a huge fan of Jack White, The Black Keys, Vampire Weekend and Phoenix thus including them in my sample set.

READ THESE POSTS NEXT!

Make sure you go out to the 2014 Music Festival Calculator and score the festivals yourself!  Please provide me feedback on how you think my scores are and give me your own ranks.
Check out my previous review of the following lineups:
Get it.
at 11:30 PM