I drove into Chicago last Friday after work to visit a good buddy of mine for the weekend (for blog purposes, his name is Gary).  I got in around 9pm CST, but immediately got stuck in an awful Chicago street snow bank.  Gary lives in Bucktown and for those of you who know Chicago streets, know its awful in the winter to park.  He came out and pushed me out and we were at his place enjoying a beer by 9:30.

The reason for coming in was I really wanted to see one of my favorite bands, Dr. Dog on Saturday (I'll get to that in another post), but Gary told me one of his latest favorite bands Houndmouth was also in town on Friday.  I was in because I'm always in for a concert regardless of who's playing - to a certain extent. So, after a few beers we headed over to Lincoln Hall.  We got there right after the opener who I wasn't familiar with.  Houndmouth came on stage around 10-10:30 and I was pretty impressed from the start.  They have a pretty sweet dynamic: part folk, part rock, part country, part female singer, part male singer.  I can get into folk if its a bit more upbeat and these guys rocked it.  I listened to a few songs on Spotify on the way in and they played most of the songs of their latest album, From the Hills Below the City.  On the Road and Casino (Bad Things) were two of my favorites live.  They had the crowd singing along from the first note.  Lincoln Hall was pretty packed, but luckily we landed a sweet spot on the steps next to the rail and didn't bugged by security to move.  I'll definitely check them out again.  They'll be playing a few festivals this summer, so there is a good chance I'll see them more than once.  One thing I will say, as I always do:  Please come to Cleveland.  No one does anymore.  Skip Columbus, Detroit and Pittsburgh.  We're cooler.

I'm a big gig poster guy too and it just so happened they had one for the show and attached the post.  Its done by a guy named Dan Grzeca.  I checked online and he's done a ton of posters for some sweet bands (Black Keys, Portugal. The Man).  It seems like he does only Chicago shows.  A bunch of his posters have the bird on top of a vehicle/large object theme.  I like the theme and I like his colors on this one.  Bright blue jay saying, "Hey what'dya want from me?" chilling on top of a steam engine.  Pretty solid.  Nice job Dan, if you're reading this. 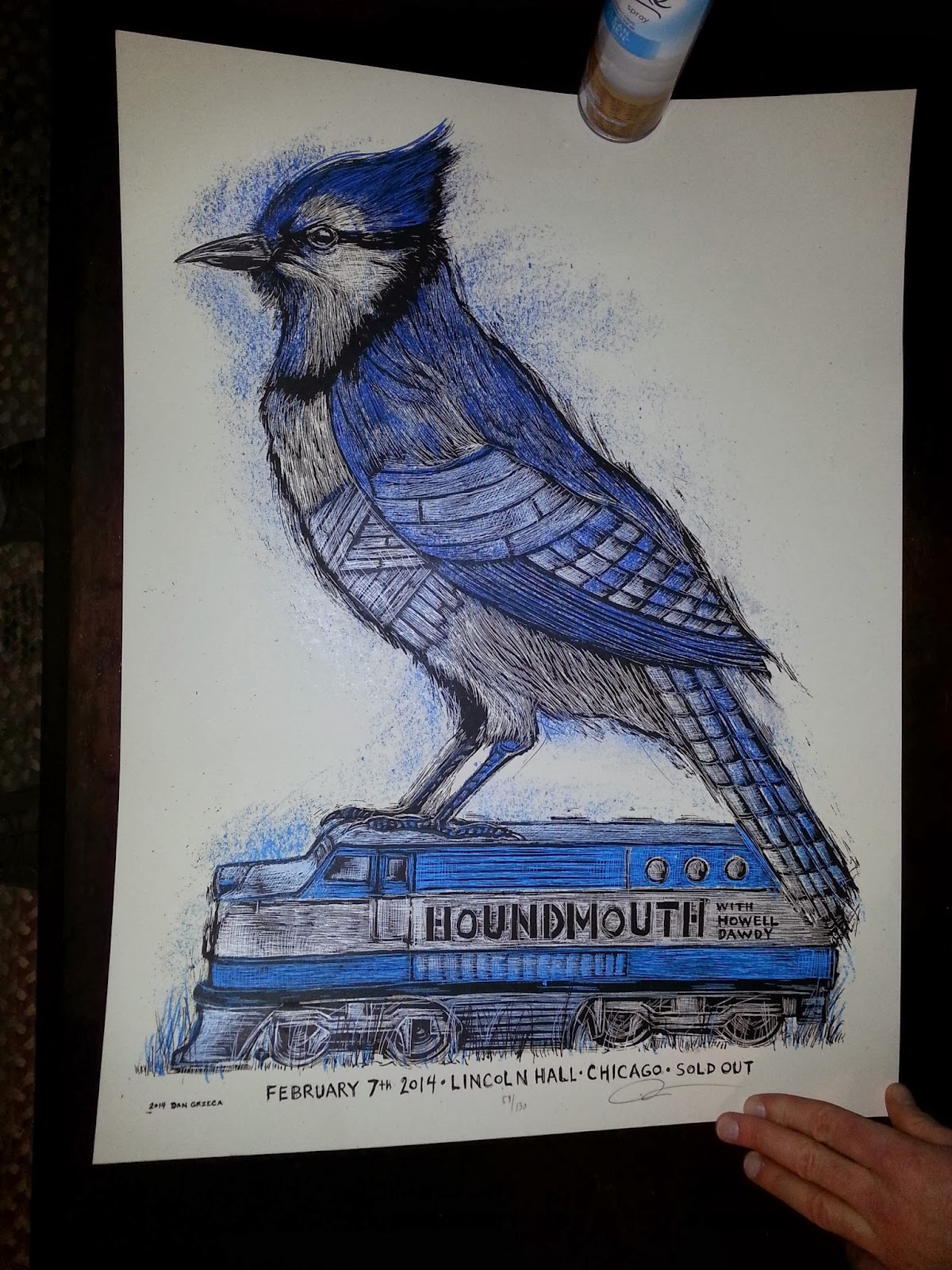